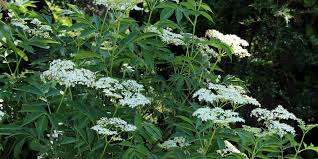 Walk near most wetlands in the southeast and you will likely stumble across a graceful stand of elders. The elder offers an unbelievable variety of medicinal and practical uses from every part: bark to berry. You’ll soon learn to appreciate elder’s charms for everything from fevers to beauty tonics. But do beware! Elder is infused in deep and mysterious tradition and trained herbalists know that cutting her without permission may bring you harm and bad luck rather than reward.

My introduction to the great elder bush, however, came not in a magical but rather in an unusual way. In the early 1980s when Martha Stewart was just beginning to have an impact through the media on the use of herbs, I was in my second year of herb farming in the low country of South Carolina. A determined Junior Leaguer from Augusta, Georgia, often ventured down the dusty, Colleton County roads to find our farm. She packed as many strawberry jars planted with culinary herbs as she could fit into the back of her Volvo wagon and happily turned around for the two-hour drive back to the big city.

During one of her many visits, Mary shared with me how she loved to make elder wine each year. I have never forgotten her description of the harvesting procedure, a typical Old South tale. Elder, she explained, thrives in ditches and low, wet areas most likely infested with snakes. Mary’s solution was to take along her housekeeper who got out of the car and collected the elderflowers on her behalf! I am nearly certain that the Junior Leaguer from Augusta did not ask permission to cut the elder as she and her husband soon divorced her and she fell into financial ruin. This woman taught me two important lessons: always take along wading boots when looking to harvest elder, and always request permission before snipping away!

Elder is a common shrub typically found along waterways and ditches and in moist fields. S. simpsonii, the typical Florida species, is almost indistinguishable from S. Canadensis, which grows throughout the Southeast. Yet a third species, S. pubens can be found in the mountains in other parts of the southeast.

Often resembling a large bush, elder has small white flowers that form in the summer and through the fall until the first good freeze when the plant dies back. The umbrellalike clusters called umbels often reach 6 inches across. Elder has smooth gray bark on the trunk and slender branches with corky bumps and white pith inside (except S. pubens , which has brown pith).

The opposite, compound leaves, which can be more than 3 feet long, contain 5 to 11 serrated leaflets each about 3 to 4 inches long. The fruit is a purplish-black berry about 1/8 of an inch that forms in clusters in the summer and fall. These native species range from 3 to 15 feet tall.

Elder is abundant throughout Florida and coastal Georgia, South Carolina, and North Carolina and is rarely cultivated in the U.S. However, if you wish to cultivate elder, the easiest method is to liberate the numerous suckers that can be found at the base of the plant and relocate them to a moist spot in the sun or partial shade. Just remember to ask first!

In Florida, the flowers appear in spring and the dark purple berries begin to appear in early summer. Into the late fall, elder can be found in stages of both flowering and fruiting. As you travel north, the flowering time is delayed and the season is shortened.

Elder flowers should be picked fresh as the buds open and dried or processed into preserved medicines. The humidity in the southeast requires that they are dried in a warm oven on low or dehydrated in the refrigerator. If you are purchasing elderflower commercially, be sure the flowers are beige and not brown. Brown flowers indicate oxidation, which means the flowers has lost much of their medicinal value.

When using the flowers and berries, the indigenous varieties of elder can be used just as the European cousin S. nigra. with two exceptions: the North American species are woodier and have larger flowers and the roots and bark of the are more toxic.

Elder is a versatile plant and its various parts have drastically different uses. The flowers are gentle enough to use with children suffering with colds while the leaf and bark are potentially strong purgatives with toxic constituents. Take time to become familiar with this grand healing plant so that your applications are not only effective, but also safe.

Elderflower infusion clears mucus discharge when the phlegm is yellow or green from a heat condition. As a diaphoretic, the warm infusion of flowers helps to release the exterior when sweating is not already present. Elderflower infusion is also the choice for an acute wind-heat pathogenic invasion with a sore, scratchy throat, fever, and phlegm.

While elderflower is strong enough to stand on its own as a single for colds and flues, it can be combined with other herbs to enhance its ability to clear wind-heat or to treat specific ailments that may accompany a cold or flu.

The drying nature of elder is appropriate for conditions where there is a large amount of phlegm in the respiratory system, especially with the presence of thick, yellow, or green phlegm. However, elder does not have a strong enough antibiotic effect to clear heat toxins, so stronger herbs should be used in combination.

Elderflowers contain flavonoids quercetin and rutin, well known for their anti-allergenic and anti-inflammatory actions. Elderflower is restorative to the mucous membranes that are irritated by allergic reactions. Elderberries are a well-known restorative immune tonic rich in vitamins A and C. A syrup made with them is useful as a prophylactic before hayfever season.

While elder has endless medicinal uses, it also has many uses which will enhance your quality of life from culinary treats to beauty miracles.

You can add ripe berries to pancakes and infuse berries in red wine (a traditional rheumatism remedy), or infuse the flowers in white wine for stuffy sinuses. The berries should only be picked when they are ripe and made into syrup, wine, or jam and other culinary dishes and drinks.

The mucilage of the elderflower lends soothing and softening benefits to the skin. At the same time, its gentle astringing qualities tone pores and reduce wrinkles. Bioflavonoids contained in elder promote circulation of blood and strengthen capillaries. These dainty white flowers are also effective to whiten the skin and fade freckles.